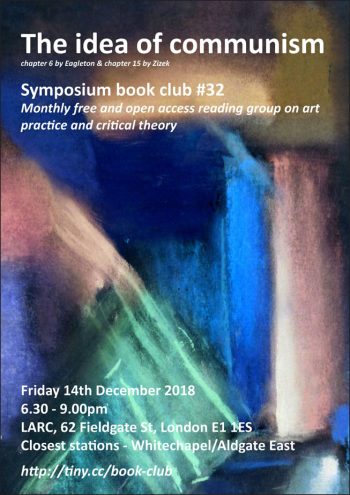 Much recent political and economic analysis – especially on the left – has focused on the triumph of global capitalism or late capitalism, the collapse of structures of opposition and – as a perceived consequence – the impossibility of change. (Some would include Mark Fisher within that category.) However, other voices on the left argue that – far from triumph – capital is at a point of material and existential crisis and have begun to look at how Marx’s ideas can be applied afresh in the 21st century.

The only true question today is: do we endorse the predominant naturalization of capitalism or does today’s global capitalism contain antagonisms powerful enough to prevent its indefinite reproduction? (Zizek)

I want to explore these perspectives through two chapters in the The Idea of Communism edited by Zizek and Douzinas. At some point in the discussion I also want to briefly add in a 3 minute outline of Streeck’s book How will capitalism end – a structural analysis of capital’s economic development from 1945 to the present.

Terry Eagleton explores communism through two Shakespearean characters – Gonzalo from The Tempest and Lear. Gonzalo envisions a world of plenitude and freedom for all – of ease, plenty and liberation from labour. But Lear represents a world of inner and outer turmoil, of a humanity driven by its culture into desire, excess and destruction. Eagleton explores the ambiguity that capitalism provides the material resources to liberate us from material need but creates a world of lack and poverty. Instead, communism aims to harness the material to release us from the confines of materialism. Eagleton explores the catastrophe of environmental damage and asks if the species of communism we will find will be Gonzalo’s comic superfluity or the catastrophic one of Lear’s destitution.

Zizek starts with Lenin in 1922, at the end of the Civil War and the Russian economy in ruin. In a text called On ascending a high mountain Lenin contemplates how communism can ‘begin again from the beginning’. Zizek asks how (post 1989, post 2008) communism can again begin at the beginning. He references an article by Eric Hobsbawm titled Socialism failed, capitalism is bankrupt. What comes next? “The answer is communism” (Zizek). He explores the ideas of Hardt and Negri on reclaiming ’the commons’ of culture, external nature, internal nature and – most importantly – the re-inclusion of the excluded. Zizek also looks at agency, especially the role of the state (“the true task should be to make the State work in a non-statal mode”). There are large debates on the communist left about the state (post 1989 some reject the state model entirely) and immaterial production.

Zizek concludes by explaining that the working class has been – or become – split – into three separate components  “…the ‘three main classes’ of today’s developed societies, which are precisely not classes but three fractions of the working class: intellectual labourers, the old manual working class, and the outcasts…”  The task is to reunite them!

The session will start with everyone having a brief input. Then we’ll explore some of the following questions

It would be good to read the other chapters in The idea of Communism – all are relevant/interesting. Ideas expressed by Hardt, Negri & Ranciere are often referenced in debate and discussion