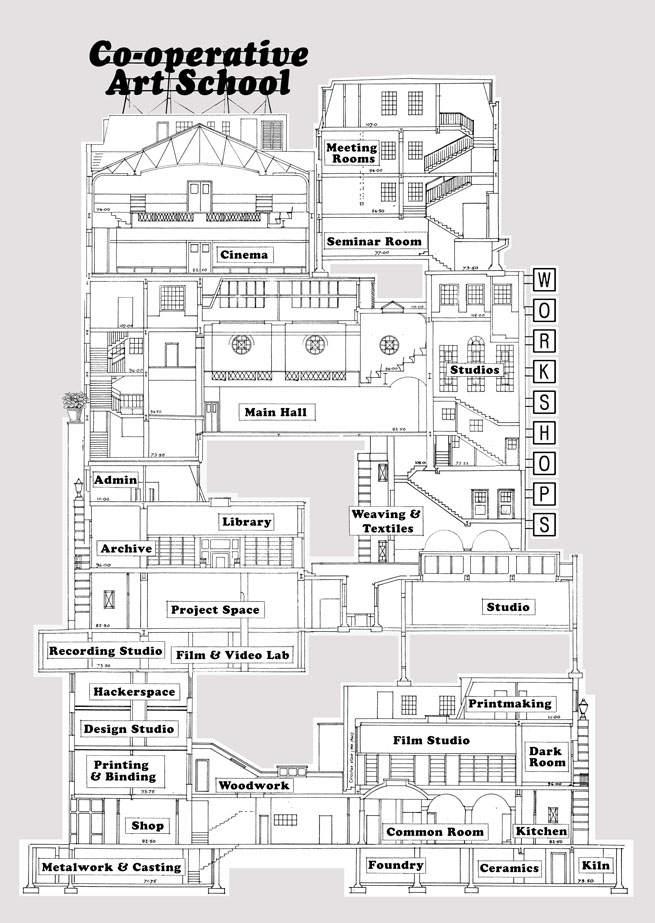 Resources for a co-operative art school

This is an unfiltered list of co-operatives and resources on coops and cooperative education, complied in conjunction with the research project A co-operative art school? The list is updated frequently and will eventually be organised into sections, please check back again. If you would like to recommend a resource please use the contact form to get in touch.

Catalyst Collective
1992 UK
Worker’s coop that supports other coops and collectives, helping people take control of their housing and work through common ownership and collective decision making. They offer free help and advice for housing and worker co-ops, help coops with accounts and book-keeping, train and facilitate coops and groups doing their own accounts, book-keeping and administration, support co-operative businesses, offer advice for groups that want to set up housing co-ops and a cheap registration service.

Co-operative College
1919 Manchester
A charitable trust set up to deliver programmes of training and education on co-operative values, ideas and principles within co-operatives, communities and society more broadly. It also works with partners in the co-operative movement and higher education to research the historical and contemporary role of co-operation.

Co-operatives UK
1869 Manchester
The trade body and network for co-operatives in Britain. Originally called the Co-operative Central Board and then the Co-operative Union, Co-ops UK is a co-operative federation that represents co-operative enterprises in the UK. It delivers training for cooperatives and The Hive, a support programme for co-operatives. The website provides information and online resources, including how to start a coop (with tools for planning, selecting a legal structure and registering your coop), model governing documents, dealing with conflict, a podcast &c.

David Cross
Artist and Reader at UAL. His research, practice and teaching currently focuses on ‘sustainable’ development, financial systems, fossil energy dependency, climate breakdown and the cultural transition to a post-carbon society. Cross has proposed that students and staff work together to identify and map the extra-economic value produced in the University/art school, as a prelude to producing a viable model of the University as a not-for-profit co-operative.

Disroot
2015 Amsterdam
Platform that provides online services based on principles of freedom, privacy, federation and decentralization. They provide free and secure email accounts, Cloud storage powered by Nextcloud, discussion Forum and mailing list powered by Discourse, XMPP instant messaging  and tools for collaborative work such as Disroot pads powered by Etherpad, Calc online spreadsheets powered by EtherCalc, Project Board, a project management tool powered by Taiga, among others.

Feral Art School
2018 Hull
A co-operative art school of professional artists and educators who encourage experimentation and collaboration. Feral Art School is takes place across the city in a range of venues. They invite students from all walks of life who have a curiosity for engaging with and making art work, regardless of previous experience and skills. Their courses progress from general introductory level to more advanced levels.

The Field
2014 New Cross
The Field is an independent, co-operatively run social and educational project, that is not-for-profit and run by its members. Through local political action, radical education, mutual care, solidarity, shared resources and collective service provision, The Field creates a space to explore alternatives to the inequality, competition and exploitation of capitalism.

Footprint Workers Co-operative
2000 Leeds
A small ecologically minded co-operative printers based in Leeds. All workers are members and joint owners of the cooperative. They print books, booklets, zines, leaflets, stickers, newsletters and fliers at affordable prices and a wide range of quality.

Free University of Brighton
2012 Brighton & Hove
Cooperative, community-led organisation that provides and promotes free educational events across the city. They aim to grow an alternative education system that benefits everyone, whoever they are and whatever their financial means. They offer free courses, practical workshops, introductory taster sessions, lectures, talks, film screenings, discussion and debate in a wide variety of subjects. They also offer validated, degree-level courses in philosophy and social sciences. Their aim is to turn public spaces into classrooms, enabling communities to come together to think, develop, learn,  question the world around us and explore how it could be different and better.

The Hive
Co-operatives UK
Support programme for co-operatives delivered by Co-operatives UK. It offers free introductory workshops for people thinking about setting up a coop, supports existing coops and provides bespoke training and mentoring for groups that want to set-up a co‑operative or convert a business into co-operative or community ownership. The website has online resources and a forum.

Journal of Co-operative Studies
1967 Manchester
A peer-reviewed international academic journal, which aims to promote knowledge, research and innovation within the co-operative sector. It publishes articles on a wide range of subjects within the fields of co-operative enterprise, organisation and management. Its primary focus is acting as a bridge between academics and practitioners in advancing knowledge and understanding of co-operation. The Journal is published by the UK Society for Co-operative Studies.

Learning Cooperative
2016 London
Offers affordable private tuition, while paying tutors from around the world a fair wage. The Learning Cooperative puts students together with teachers in Gaza, London and Pakistan in private language courses. Languages are taught in their political, historical and social context.

Leicester Vaughan College
2017 Leicester
An independent higher education college set up as a co-operative community benefit society in response to the closure of Vaughan College. Aims to provide university-level education dedicated to the needs of part-time learners. They currently offer a non-accredited programme and are working towards offering fully-accredited degrees in various forms of counselling and in arts, humanities and social sciences. The college advocates secure working conditions and equitable pay for staff. It is structured to encourage co-operation among, and between staff, students and members of the Society in the development the College.  It operates on the principle that fair and supportive treatment of staff will also enhance the student experience.

Loomio
2012 Wellington
Free open-source web forum that facilitates collaborative decision-making using discussion threads, proposals, polls and other consensus gathering tools. Loomio emerged from the Occupy movement in New Zealand, it is a workers’ coop and part of the Enspiral network of social enterprises. Groups can be public or private, Worker Co-operatives is an example of a public group. Members can start discussions on specific topics, post comments and create proposals. Proposals generate feedback and additional discussions. Members can agree, disagree, abstain, or block a proposal and they can adapt these tools to their own decision-making process. See the Loomio Co-op Handbook for  documentation on how the Loomio co-op functions.

Mondragon University
1997 Arrasate, Mondragón, Spain
A non-profit co-operative university, which belongs to the Mondragon Corporation, a federation of worker co-operatives in the Basque region of Spain. It was created by the association of three educational co-operatives and offers postgraduate courses, on-demand courses and long and short-term courses for students and workers in Engineering, Business Studies, Humanities and Education. The university involves students and staff in decision-making, including staff salaries and fees. It carries out research and it has a close association with other co-operatives where students carry out work placements, according to a practical teaching methodology called the Mendeberri Project.

Open Organisations Project
Indymedia UK London Working Group
A framework for a functional organizational structure that people can choose to adopt when working together. It proposes solutions to help set up and maintain transparent, accountable and  participative communities. The project emerged as a result of widespread dissatisfaction with the formal and informal power structures in governments, corporations and voluntary or activist groups. Informal structures are hidden and difficult to challenge, identify and discuss. This is a major cause of conflict in activist and volunteer groups, which takes up a lot of time and energy, and has a demoralising effect on individual groups and on the movements they are involved in.

Openki
2010 Zurich
Openki.net is an interactive web-platform that facilitates the organization of peer-to-peer courses for barrier-free access to education for everyone. Initiated by activists from Autonomous School Zurich in 2010, it is part of an evolving, co-created toolbox for self-organized education and self-organization. The platform is here.

Radical Routes
1992 Leeds
Radical Routes is a federation of radical co-ops that are committed to working for positive social change. The network is made up mainly of housing co-ops, workers’ co-ops and social centres. Radical Routes support their member co-ops with a mutual aid structure, training workshops, practical support and loan finance via their ethical investment arm Rootstock. They organise four national gatherings per year, these are open to the public and host meetings, socials and a programme of introductory workshops for new members. They also publish guides and online resources for co-operatives.

Really Open University
2009-2011 Leeds
The ROU was non-hierarchical and open-access project initiated by students and staff of higher education institutions in Leeds to explore and experiment with the function of the university and its role in society. ROU did not propose a new model institution or alternative system but sought to understand the university and its role in society, explore ways and means of reclaiming pedagogical space and to facilitate plural transformations in dominant ideas about higher education. ROU hosted open discussions in reclaimed spaces and organised Re-imagine the University (24-26 Nov 2010, University of Leeds), see the review by Richard Hall. They produced the journal Re-imagine the University and published a regular newsletter the Sausage Factory. They published three reforms: Imagine the Abolition of all Fees and the Institution of a Living Wage, a Debt Jubilee for all past students, and, the Abolition of the Research Excellence Framework and the National Student Survey.

RED Learning Co-operative
2018 Oxford
A group of cooperators who conduct research and run collaborative education and training that leads to social change.

Seeds for Change
2000 Lancaster
A workers’ co-op of campaigners offering training, meeting facilitation and resources for groups and organisations that are confronting injustice and building sustainable alternatives. They offer training and meeting facilitation, and an extensive list of publications and online resources on collective organising, consensus decision making, developing strategies, campaign and action skills, setting up groups and co-ops, co-operative governance and training for trainers.

Social Science Centre (SSC)
2011-2019 Lincoln
The SSC was an experiment in free, co-operative higher education. It was created as a critique of and an alternative to higher education in the UK.  Former members of the Centre are currently developing a Co-operative University with degree-awarding powers. The SSC offered free higher education in Lincoln and was run by its members. It was formally constituted in May 2011 with help from the local Co-operative Development Agency. There was no fee for learning or teaching, members contributed financially or with their time on a voluntary basis.

Study Center for Group Work
Caroline Woolard, Stamatina Gregory, Cooper Union, Spaceworks
An online resource and an network of artists who meet to share methods of collaboration with one another. The center hosts an online library of collaborative methods with lesson plans, readings and objects that have been recommended by artists. It also organises gatherings for artists to share resources and accessible public training in methods of listening, attention and collaboration. The Center aims to cultivate a network of visual artists who are committed to group work through daily practice. It was founded by Caroline Woolard in 2013 in New York.

Evening Class
A collection of resources on worker coops in the are.na resource sharing and bookmarking channel collated by Evening Class.