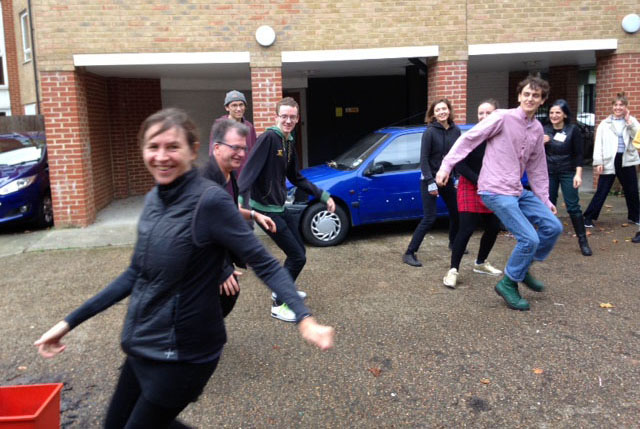 A bibliography on self-organisation, DIY, peer-to-peer networks, co-operation, collectivity, group dynamics, collaboration and study groups. Most of the links lead to accessible online copies, others link to the publisher’s page or other sources of additional information. For additional resources on self-organisation, group work, co-operation and collectivity see the separate resource pages for alternative art education and co-operative art education.

Bion, Wilfred R. (2001/1961). Experiences in groups and other papers. London: Routledge. Influential study of unconscious group behaviour that  contributed to the evolution of group psychotherapy. A record of observations from Bion’s work with groups (including study groups) that he believed might apply to society more broadly. Bion suggests that there are two groups present in every group, the work group which keeps the group anchored to its purpose, and the basic assumption group, which is mired in the tacit assumptions that inform behaviour within the group.

Bookchin, Murray (2005/1982). The Ecology of Freedom: The Emergence and Dissolution of Hierarchy. Oakland: AK Press. Traces the conflicting legacies of freedom and domination, from the emergence of human culture to global capitalism and argues that environmental, economic and political devastation are born at the moment that human societies begin to organize themselves hierarchically.

Bradley, Will, Mika Hannula, Cristina Ricupero and Superflex eds. (2006). Self-Organisation/Counter Economic Strategies. Berlin: Sternberg Press. Survey of different approaches to the creation, dissemination and maintenance of alternative, ‘bottom-up’ models of social or economic organisation, and the practical and theoretical implications, consequences and possibilities of these self-organised structures. The term is borrowed from systems theory and the natural sciences, where it describes systems whose internal organisation tends to increase in complexity without being guided by an outside source. It is used to describe social groups or networks that are independent of institutional or corporate structures, non-hierarchical, open and operate participatory decision-making processes. Counter-economic strategies are radical alternatives to classical capitalist economic organisation. Writers from different fields have been invited to investigate these themes with reference to particular situations. They discuss a wide cross-section of activity, from new approaches to intellectual property and impact of the free/open source software movement to political activism and the self-organisation embodied in informal architecture and the black economy. They represent diverse, and sometimes conflicting, viewpoints and interpretations.

Forkert, Kirsten (2006). Artistic and political autonomy, or the difficulty and necessity of organizing artists. Chto delat/What is to be done? When Artists Struggle Special Issue. Republished in the Journal of Aesthetics and Protest.

Molenda, Ania and Cristina Ampatzidou, MoneyLab Network (2020). Radical Care: Embracing Feminist Finance. Rotterdam and Amsterdam: Amateur Cities and the Institute of Network Cultures. A collection of interviews and artworks that address the question of value in terms locality, cooperation and caring. MoneyLab is a collective of artists, designers, researchers, geeks and activists experimenting with more equitable, diverse and sustainable futures for finance and economy.

Opstrup, Kasper (2017). The Way Out. Invisible Insurrections and Radical Imaginaries in the UK Underground 1961-1991. Colchester: Minor Compositions. A counterculture history of art and experimental politics. Examines the radical political and hedonist imaginaries of the experimental fringes of the UK Underground from 1961 to 1991 and the relations between collective and collaborative practices with an explicit agenda of cultural revolution. Charts a history of experiments with cultural engineering, art, media, politics, radical education and the occult revival. Case studies include speculative techniques for igniting an insurrection with cultural means: the sigma project, London Anti-University, Academy 23 and thee Temple ov Psychick Youth. Contained within these imaginaries is a new type of action university: a communal affair that would improvise a new type of social relation into existence by de-programming and de-conditioning us. Instead of being turned upside down, the world was to be changed from the inside out.

Purchase, Graham (1998). Anarchist Organisation: Why it is Failing. Spunk Library.

Seeds for Change (2018). Effective groups. Lancaster: Seeds for Change. A guide to successful group organising, from starting up groups to keeping them going.

Seeds for Change (2013). A Consensus Handbook: Consensus decision making for activists, co-ops and communities. Lancaster: Seeds for Change. Consensus decision making is a creative and dynamic way of reaching agreement between all members of a group. Instead of simply voting for an item and having the majority of the group getting their way, a group using consensus is committed to finding solutions that everyone actively supports, or at least can live with.

Seeds for Change and Footprint Workers’ Co-operative (2015). How to set up a Workers’ Co-op. Leeds: Radical Routes. Lots of information to help set up your workers’ co-op. Written in the order you’ll be doing things if you set up your workers’ co-op from scratch. Some sections (such as Chapter 12: Working together), may be useful throughout the process.

Temporary Services (2006). Group Work. New York: Printed Matter. A multitude of perspectives on group work and collectives from the 1960s to the present. Interviews with General Idea, Haha, The Ex, WochenKlausur, What, How & for Whom (WHW), essays on The Abortion Counseling Service of the Chicago Women’s Liberation Union and the anarchist Guerilla street theater group The Diggers.

Thornton, Cassie (2020). The Hologram: Feminist, Peer-to-Peer Health for a Post-Pandemic Future. Pluto Press. A vision for revolutionary care: a viral, peer-to-peer feminist health network. Drawing on radical models developed in the Greek solidarity clinics and directly engaging with discussions around mutual aid and the coronavirus pandemic, The Hologram develops the skills and relationships we need for the anti-capitalist struggles of the present, and the post-capitalist society of the future. One part art, one part activism, one part science fiction, this book offers the reader a guide to establishing a Hologram network as well as reflections on this cooperative work in progress.

Trapese Collective (2007). Do It Yourself: A Handbook for Changing Our World. London: Pluto Press.