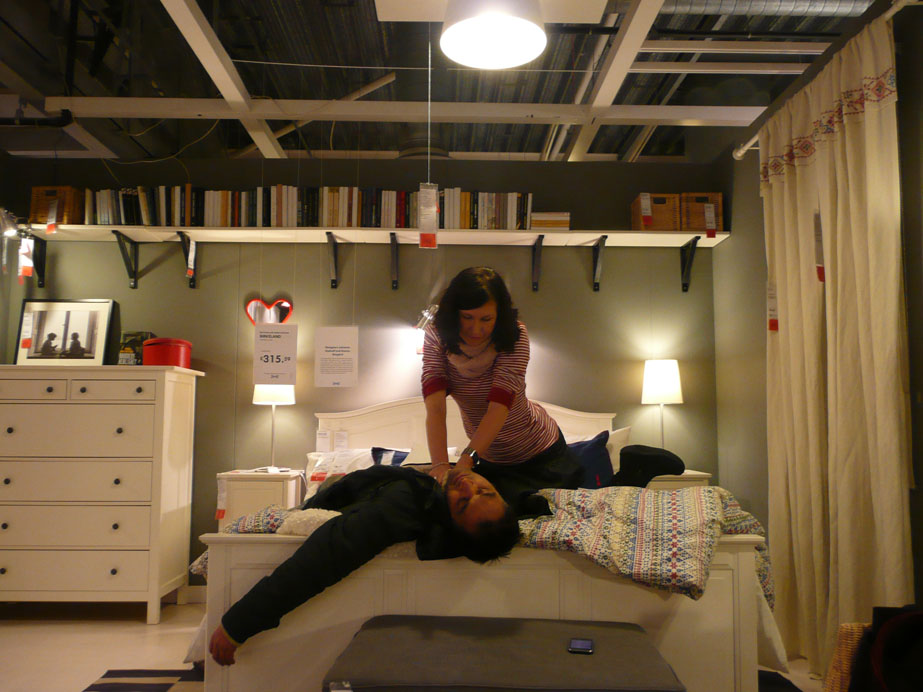 The STUDIO CRIT was an opportunity for artists, curators, designers, film-makers and other producers to present their work to an audience of peers for discussion and feedback. These events were free and open to everyone. Please scroll down for the guidelines and event archive.

STUDIOCRITS typically focus on the work of one artist at their studio or other appropriate venue. There is no standard format however, because everyone’s practice is different.

VENUE The venue will most likely be your studio. If you don’t have a studio don’t worry, we can find an alternative. You might have an exhibition on, you might show your work in your flat, community space or temporarily available space. The space needs to be appropriate for the display of your work with a capacity for about 10 people.

DATE & TIME We will set a date and time that is most convenient for you and your venue. Weekends and weekday evenings are convenient times for most people. The crit normally lasts two hours with a break in the middle. Please consider providing snacks and refreshments.

DOCUMENTATION Please prepare a short bio and up to 6 images of your work for the website. This is to give potential audience members an idea of what your work, practice and/or research is about, attracting an audience with common interests. We will work together to present your work in the best possible way.

BIO Please prepare a short bio no longer than 250 words. This should outline your practice, background, education and what you are interested in exploring in the STUDIOCRIT, highlighting the topics and themes that you would like to address in the discussion.

IMAGES Choose up to 6 images that best represent the questions that you would like to raise about your practice. The maximum resolution for images is 923 pixels on the longest side, if in doubt and for the best results please send hi-res images. Please send captions with your images and include the title, date, materials and dimensions/duration for each one.

STATEMENT You might want to discuss an artist statement or application/proposal in conjunction with your work. Your statement should be no longer than 500 words, please print 15 copies and bring them along.

Maria Christoforatou lives and works in London. Her practice is concerned with the unnerving relation between belonging and unbelonging examined through the notion of one’s home. Maria received her BA (Hons.) in Fine Art from the Athens School of Fine Arts (ASFA) in Greece and her MA in Painting/Fine Art from Wimbledon College of Arts, University of the Arts London. She recently graduated from Chelsea College of Arts, University of the Arts London with an MPhil in Fine Art Practice-based research. Her research focuses on narratives of home and displacement in contemporary art practice. She investigates experiences of displacement through the idea of home, where ‘home’ is identified, mediated and ‘re-made’ through media and materials of different kinds, and how objects both mediate for the artist and become agents of experience for the viewer.

Based in London, Jo Wolf works conceptually with mixed media. Although her pieces result from an act of inquiry, the consequent material form is equally relevant to the idea. Coming from a DIY culture and maker’s background, Jo studied at Camberwell College then Central Saint Martin’s and after graduating in 2005, has maintained a pre-emerging position of artistic obscurity. From 2008 she took an interest in the cause alongside the impact of the economic crisis and responded by creating a limited collection of 3D design and 2D depictions of mass circulated imagery. Her recent series sees a return to abstract compositions.

DATA: a series of observations, measurements or facts. From Latin: dare to give.

The DATA series consists of two sets of eight canvases, entitled DATA.0 and DATA.1, which were inspired by a reading of ‘The Death of the Author’. Written in 1967, the French literary critic and theorist Roland Barthes proclaimed, ‘a text’s unity lies not in its origin but in its destination’, and that ‘It is language which speaks, not the author’. He states that ‘a text is … drawn from many cultures and entering into mutual relations of dialogue, parody, contestation, but there is one place where this multiplicity is focused and that place is the reader…’

Bathes offers a theory that informs our understanding of this realm of reading and interpretation. Applicable not only to the written text however, which is open to translation and elucidation, it is also considered in the reception of a work of art. Yet the visual text or artwork often conveys information through media with the omission of written language. Our understanding of art is affected by what we know and believe, a perception based on learned assumptions regarding taste, truth, beauty, status, experience, etc. The authority of a work of art and its meaning alters according to the context in which it appears and although artists may give a rationalized explanation of their work, the gap between words and what we see may not be completely settled.

In the art world, critics hold the strongest platform from which to deliver their views of the artwork, beyond the artist, yet their opinions often expand or contradict the original said intentions. This process of presentation and judgment begins in art school, in the critique. DATA tells an abstract tale of one experience of this process, it also raises questions about the role of the crit and the significance of the rhetoric.

DATA.0: Eight relatively small square paintings consisting of the basic elements of painting, in an aesthetically purified abstract form, question the conceptual relationship between the object/canvas, text/title and meaning.

DATA.1: Constructed from silks of unrestricted colours, the larger canvases mirror the geometric compositions of the first series and although removed from the realm of painting, pose the same questions.

I am a London-based artist who is currently in the process of applying to MFA programmes. I was born in 1995 in Minsk, Belarus, and moved to the UK in 2009, at the age of 14. I am now in my third year of BSc in Philosophy at LSE. I received some formal art training in Minsk but have since practised independently and in the recent years my work has taken a much more conceptual turn. My research has been fuelled by the study of philosophy, critical theory and I have recently become fascinated by the notion of the abject. I work across a wide range of media and my practice could roughly be divided into two categories: institutional critique and the art driven by my preoccupation with human autonomy.

Through painting, video, sculpture and installation, I explore the relationship between subject and object. My departure point is the notion of the border of your own body. I am interested in the construction of psychological and physical barriers and in distancing yourself from the rest of the world as a necessary part of identity formation. Personal space, privacy, autonomy and the sense of your body as having definite borders, as being discontinuous from everything else around you, are some of the concerns which underpin my practice.

Some of the materials I choose to use, such as gloves or shower curtains, have a literal meaning as barriers but I also want them to evoke tactile associations. In the everyday life these are some of the things which are connected with disgust at touching something unpleasant, toxic, sticky, or wet. I want this tactility and also the scale of my work to act as a connecting link between the piece and the viewer, so that she can relate to it and measure it up against her own body.

A few worries arise: Do the tactile associations function in the same way for the audience as they do for me? Does the medium of painting divert the attention away from the conceptual issues and towards the formalist ones?

In my critical work I address the following questions: What does it mean for a work of art to be a success or a failure? What does it mean for text to be ‘about’ an artwork? How and why is an artwork legitimised through discourse? I reflect on the process of research and the constant chase after innovation. I also wonder whether addressing these worries should necessarily be branded as critique.

In December we’re heading to Crystal Palace to view and discuss the work of Johanna Kwiat. After graduating from Anthropology at Goldsmiths College, Johanna studied Fine Art at Working Men’s College in London. She is based in London and currently works from ASC studios. Johanna is a co-founder partner of Art Brixton.

Most of my practice happens outside of the studio and/or gallery context. My practice is rooted in my everyday life. My work is a material or intellectual explosion culminating a long process of analyses or annoyingly circular thoughts, images and tensions. I work with mixed media, often with what I find available, and select that which is relevant to communicate my ideas. I have been preoccupied with themes of cultural myths of identity, gender and the autonomy of reason, as well as the nature of reality we live in and the possibility of circumventing its constraints. I think a lot about alienation (self and structurally imposed) and especially the persistent and seemingly universal need of private ownership, its relation with everyday violence, specifically the unseen, hidden or unspoken. I am interested in violence as an inherent quality of relationships. And yet my work is most of all an intimate history. I rework my story, parts of which I find echoed in others’ histories: imposed gender, gender roles, sexuality and forms of representation. I look at relationships between people, natural forms, signs of social aspiration and financial standing. I tamper with them. Acting out in social, public space is what interests me, and describes the way I work. I steal estate agents’ signs from real life locations. I invade an environment, space or context and question its familiar set-up.