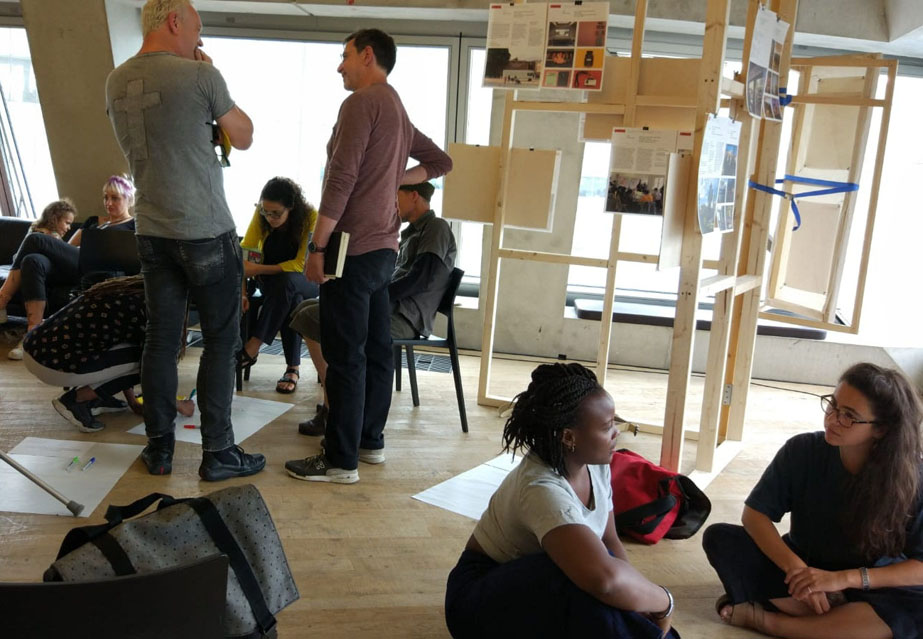 The UK Commons Assembly was held at the Tate Exchange on July 20, 2018 by the School of Civic Action, and Art&Critique were invited to make a presentation and conduct a workshop.

Torange Khonsari (Public Works) spoke about her practice in relation to The Commons as ‘social relationships that can mobilise a change through agency, trust, generosity and connectedness’. She, along with Tim Flitcroft (Commons Rising) were responsible for organising the event with a view to bring together the various Commons operating in the UK with the hope of expanding the scope of this discourse through the MA course on Design for Cultural Commons at The Cass.

The morning session consisted of introductory presentations under various categories such as Health, Food production, Energy, Digital, Technology, Culture, Urban commons, Common Law, Governance and Land. It was a real eye-opener for me to hear about so many community-driven alternative initiatives that challenge the hegemony and empower people to creatively re-think their ownership of ‘the commons’, be it the NHS (‘The NHS belongs to the people‘) or land occupancy (Urban Commons, Shared Assets). Sophia presented the ethos and work of A&C as well as similar alternative art-education networks like the the School of the Damned, Alt MFA, TOMA, and collaborative venues like The Field and Unison. It was great to see that Rosanna Thompson from The Field was there to corroborate A&C’s work in their presentation, and Sophia attended their workshop later that day. Sophia also led A&C’s workshop for around 8 participants, and got people engaged in the session, to address questions of the model of Alternative art education.

There were many ideas, models and case studies in those presentations that A&C could perhaps use to further its development plans, particularly those relating to the co-operative model. I suppose we could reach out to some of the presenters to advise us on aspects that they have encountered and overcome, so that we can begin to form a working timeline on some of our goals.

The UK Commons Assembly is an open platform to meet others, exchange knowledge and to see if there is an appetite for an ongoing UK Commons Assembly. In a contemporary context of much inequality, the Commons discourse introduces models of sharing. The Commons are about the assets that belong to everyone, forming resources that should benefit all, rather than being enclosed to just a few. The aim of the day is to put on an exhibition showing the wealth of Commons projects happening in the UK. There will be discussions as well as workshops to inform the public about the commons. It is also an opportunity to vision how the commons might work beyond the individual projects and to set up practical outcomes going forwards. The ambition of this event is to continue beyond this event in formats decided by the participants and contributors on the day.

The School for Civic Action is a pedagogical experiment that tests alternative modes of knowledge transfer at work in civic city making, challenging traditional urban teaching and disciplinary restriction. The Civic University manoeuvres across disciplines that complement one another, implementing new ways of knowing and acting. Teaching and learning at the Civic University is symbiotic; by situating its curriculum within live projects in the city, it can mutually provide a support structure back to the local communities, the sites they occupy and for the individuals enrolled.

Public Works is a not-for-profit critical design practice set up in 2004 that occupies the terrain in-between architecture, art, performance and activism. Together with our interdisciplinary network, we re-work the city’s opportunities towards citizen driven development and nurturing their rights over the city.

Commons Rising is a group set up with the aim to share knowledge and connect experiences on the Commons. By Commons we mean people self-organising to co-produce and co-govern resources that they recognise as important for their livelihood and well-being and that of the planet. We wish to act as catalysts helping to link up groups who may not think of themselves as a Commons but who are part of the broader Collaborative Economy. Through building a network Commoning can become a stronger force for positive change.