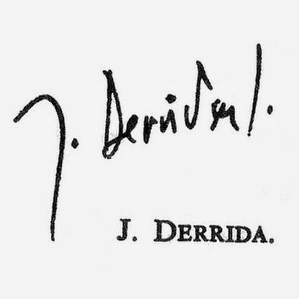 In May we’re discussing Signature Event Context, Jacques Derrida’s essay on John Austin’s speech act theory. It was originally delivered at a conference on Communication in 1971 by the Congrès international des Sociétés de philosophie de langue francaise in Montreal and first published in Marges de la philosophie (Margins of Philosophy) in 1972.

Jacques Derrida (1930–2004) was a French philosopher best known for developing an approach to criticism known as deconstruction. One of the major figures in post-structuralist thought and postmodern philosophy his work has had a significant influence across a wide range of disciplines since the 1960s – alongside attracting criticism and occasional controversy.

In Signature Event Context Derrida seeks to dig beneath the surface of concepts central to the discipline philosophy, such as communication, speech and writing. He seeks to uncover characteristics in the function of these concepts which he describes as ‘having been subordinated, excluded, or held in abeyance by forces and according to necessities that need to be analysed’.

Examining texts by prominent philosophers of language he picks up and deconstructs the ideas in their work as a means to demonstrate what he sees as the theoretically underdetermined space within which they operate.

Derrida’s starting point is the word communication. He identifies within this seemingly straightforward concept, generally understood to refer to the means of transport of meaning, the potential for alternative meanings and how this meaning depends on un-examined assumptions. He asks if ‘the word or signifier [communication] ‘communicates’ a determinate content, an identifiable meaning, or a describable value’ and notes instead that in fact ‘we have no prior authorization for neglecting communication as a word, or for impoverishing its polysemic [with many meanings] aspects’.

Derrida argues that while ordinary discourse privileges the idea of communication as being about the transmission of meaning this function largely depends on a vaguely defined but commonly accepted idea of ‘context’ – as for example the context provided by philosophical discourse. He instead challenges the idea that ‘context’ – the parameters within which meaning is determined – is ever absolutely determined. He writes: ‘Is there a rigorous and scientific concept of context? Or does the notion of context not conceal, behind a certain confusion, philosophical presuppositions of a very determinate nature?’

Derrida then takes up the notion of writing – initially contrasting it to speech, noting how writing involves the presupposition of absence – one writes in order to communicate something to someone who is absent. However he also identifies, in addition, what he calls its ‘iterability’ – both the repeatability of writing and the ability for writing, by constituting itself, to continue to exist in the complete absence of any addressee. Extending this argument, Derrida claims that even where a text, phrase or sign is lacking in its own grammatical meaning, it still amounts to a kind of writing with the structural capacity to be a sign in that it can be used as a sign of ungrammaticality by being put between quotation marks and cited. He argues that this ability for marks to be cited is actually a structural identity of all means of communication, including speech, and that not only can signs be cited but they depend on their meaning within any given context, at some level, on being examples of citation. They relate he suggests to the other uses of the same sign. He argues that not only speech but even the ‘experience of being’ (as a philosophical subject) share what he describes as this ‘graphemic’ structure of writing.

Interestingly enough, the demand for total presence and immediacy arises from mediation; or more precisely the growing range of tools of communication including the internet. It is not the opposite of, but rather the consequence of technology. (Hito Steyerl [2015] The Terror of Total Dasein: Economies of Presence in the Art Field. DIS Magazine. Originally presented as a lecture at Art and Labor after the End of Work, FORMER WEST, Warsaw 2015)

Derrida continues by examining the work of Austin on the nature of performative speech acts (acts of speech which bring a change in the world into being e.g. I declare you man and wife in a marriage ceremony). While Austin seeks to free the analysis of the performative from the metaphysical opposition of true and false and to substitute it with the value of force (e.g. a performative speech act changes something and isn’t merely a true or false statement), Derrida identifies what he sees as a failure on behalf of Austin to attend to the risk of speech acts to be void of meaning. In the final analysis Derrida argues that Austin’s argument relies on recourse to what he calls ‘teleological determination’ – ‘the presence to the self of a total context, the transparency of intentions, the presence of meaning to the absolutely singular uniqueness of the speech act’.  Derrida refutes this and argues instead that the risk of failure of speech acts is an internal and positive condition of their possibility.

Derrida’s argument hinges on a shift of the classical subject of philosophy – the pursuit and identification of the bases of external meaning – to the hidden structures underpinning the systems that are employed to examine meaning – language, discourse and writing. Through this he seeks to question some of the assumptions underpinning the enterprise of philosophy (and other disciplines) as it is traditionally conceived and radically the ability of writing to be said to contain meaning. He states that ‘writing is not reading: it is not the site, “in the last instance” of the hermeneutic deciphering, the decoding of meaning or truth’.

Strongly criticized by philosophers from an analytical tradition for the validity and sufficiency of his arguments and the accuracy of his analysis of other philosophers’ work, Derrida’s text nonetheless poses some far reaching questions about the fundamental stability of the context in which we normally seek to establish meaning. He argues that rather than this instability being in opposition to meaning, as articulated through writing, that instability – or non-meaning is in fact structurally inherent in this endeavour. Returning to his theme of writing he writes: ‘the crisis of meaning is bound to the essential possibility of writing’.

Derrida’s philosophy derives from the fact that being manifests itself through difference. His writing largely consists of carefully unpicking all attempts to deny this differentiation. Most importantly he deconstructed that philosophical tradition which appealed to speech as a source of unmediated being. (Colin McCabe)