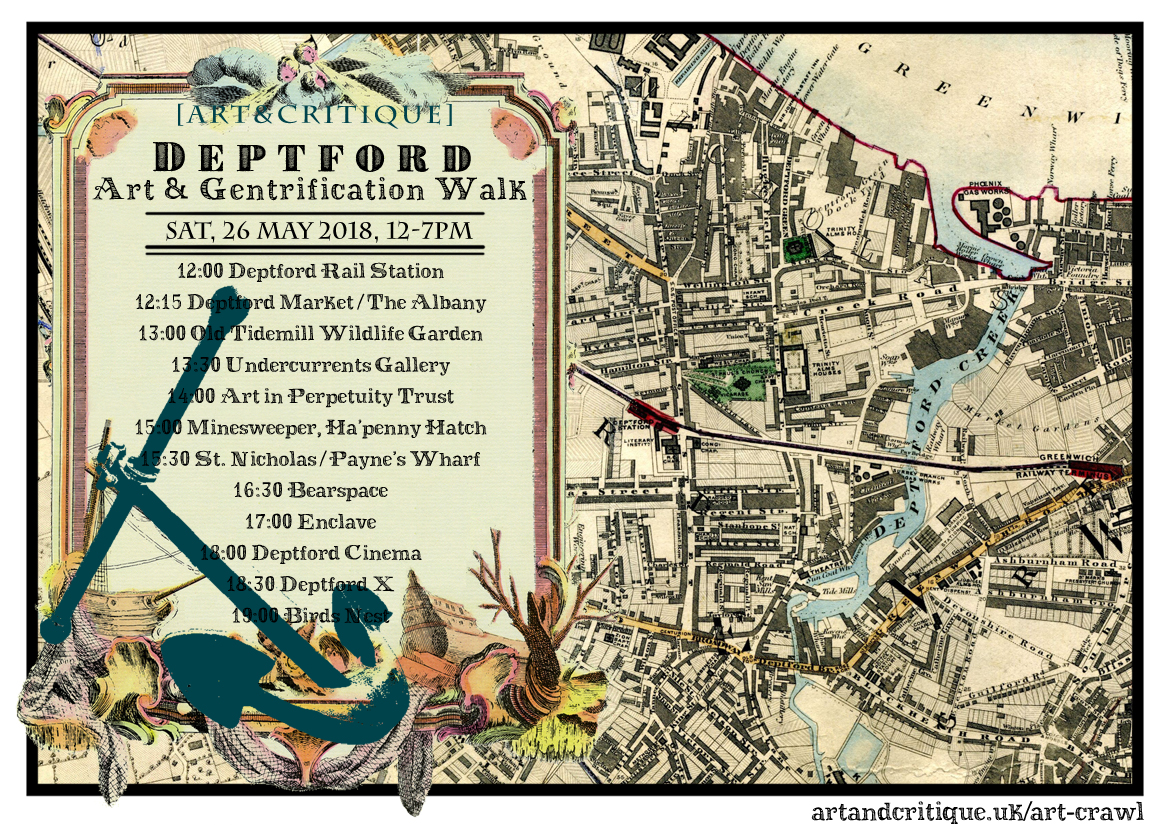 Thanks to all who came along and contributed to an excellent discussion on Jacques Derrida’s Structure, Sign and Play last week! I have included below the quotations that I forgot to bring along for the introduction. On the plus side, I suppose they might make more sense now.

The consensus was to stick with Derrida, so we’re discussing Signature Event Context at the next book club on 11 May 2018. Thanks to Nat Pimlot for preparing the material.

Save the date! The next art crawl is on 26 May 2018, and we’re visiting Deptford for a whole day of discussions on art and gentrification, and much else besides.

Join us in June for the second in the series of book clubs on Capitalist Realism by Mark Fisher, continuing with chapters 4-5 (pages 21-38). This book club will take place on *UNISON, a lifeboat-turned-project-space. We will meet at Yurt Café near Limehouse station at 2:30pm and depart at 3pm to reach the boat moored nearby.

If you would like to facilitate one of the book clubs in the series on Capitalist Realism please get in touch.

[OPPORTUNITIES & ANNOUNCEMENTS]
May 2018
The list of opportunities, open calls, deadlines, announcements & vacancies is updated regularly.
If you would like to post your listing for open calls, opportunities or vacancies on the list please send us the details.

*When Cambridge University decided to give Derrida an honorary degree in 1992, a group of (mainly analytical) philosophers and academics from all over the world wrote a letter in protest, here is their critique:

…where coherent assertions are being made at all, these are either false or trivial… little more than semi-intelligible attacks upon the values of reason, truth. (Letter against Derrida’s Honorary Degree. The Times, 9 May 1992)

Another quotation that indicates the animosity that Derrida provoked in philosophical and scholarly circles comes from the British right-wing conservative (philosopher) Roger Scruton:

He’s difficult to summarise because it’s nonsense. He argues that the meaning of a sign is never revealed in the sign but deferred indefinitely, and that a sign only means something by virtue of its difference from something else. For Derrida, there is no such thing as meaning – it always eludes us and therefore anything goes. (Roger Scruton in Stephen Moss (2004), Deconstructing Jacques. The Guardian).

When asked why his work provoked these attacks, Derrida replied that it was because his work questioned and modified “the rules of the dominant discourse, it tries to politicize and democratize education and the university scene” (Jacques Derrida, 1995, Honoris Causa). The US documentary Derrida (2002 dir. Kirby Dick and Amy Ziering Kofman), begins with a clip from a French TV panel discussion, where the presenter introduces Derrida as “a thinker of lightning thoughts, whose work is like that of miners who work by exploding the beams supporting their shafts”.