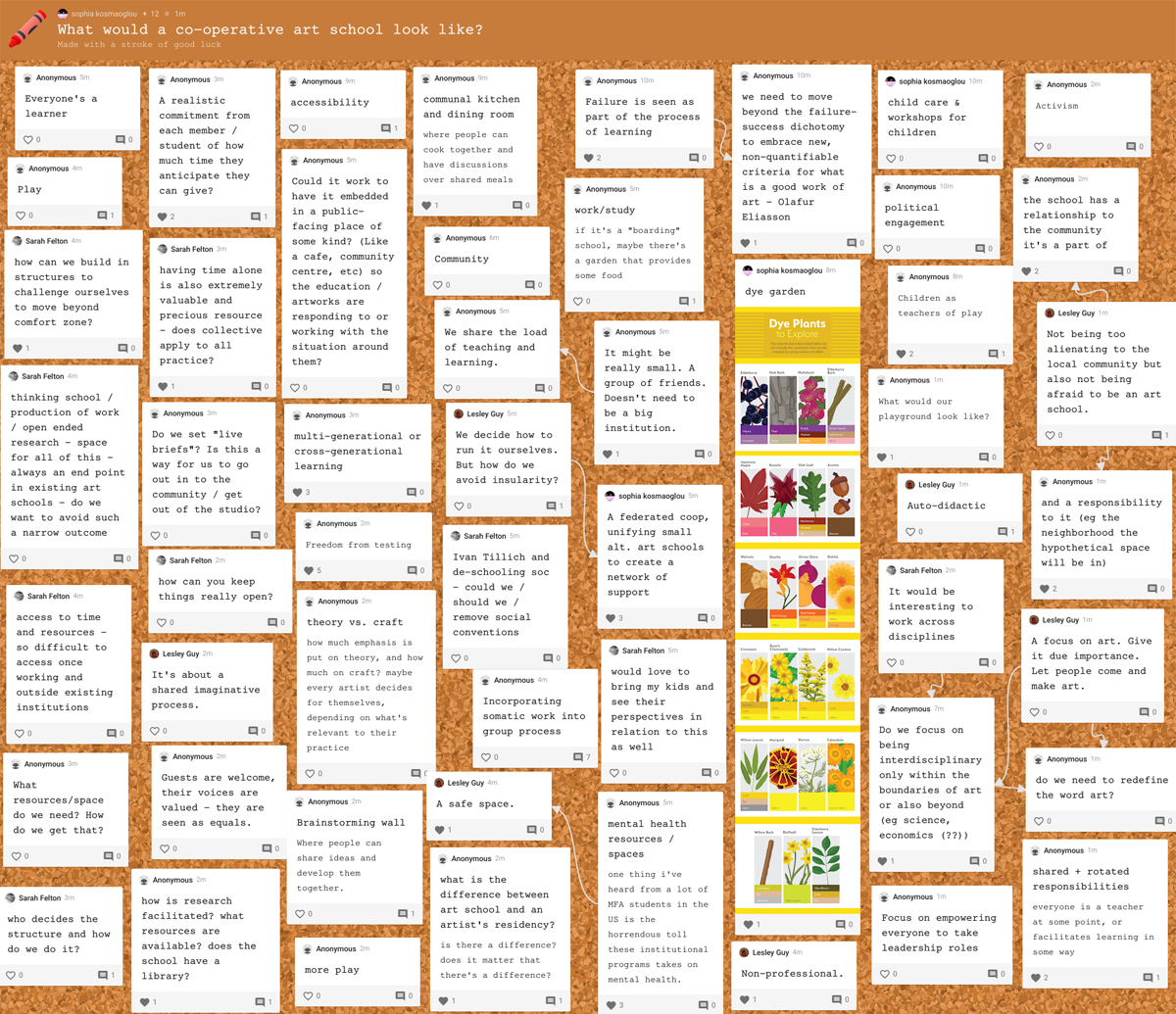 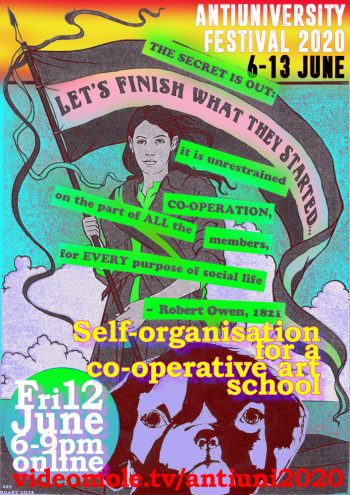 Many thanks to the participants who joined the workshop for their contributions and their patience! I can only hope that it was as useful for them as it for me. I was very excited to meet them and hear about their backgrounds, practices and reasons for joining the workshop. Many are members of collectives or cooperatives and it was especially good to have people drop in from Manchester, Newcastle, Bristol and Madrid!

My intention with this workshop was to think through and exchange ideas on self-organisation for a cooperative art school with an engaged and informed group of peers. Starting with the reading group, I wanted to frame the discussion with a set of questions. I wanted to discuss Jo Freeman’s  about structure in peer groups, with examples from the section on Collectivity from the Radical Education Workbook as a common point of reference, and the controversial topic of leadership against the background of Wilfred Bion’s concept of group mentality and Starhawks’ analysis of leadership not as a quality but as a set of rules.

Unstructured groups may be very effective in getting women to talk about their lives; they aren’t very good for getting things done… The end of consciousness-raising leaves people with no place to go and the lack of structure leaves them with no way of getting there. (Jo Freeman, The Tyranny of Structure, p. 3)

A very small minority of participants had read the text however, so I provided a short summary of each text and we had a discussion about our experiences of higher education and collectivity. We discussed our expectations, motivations and interest in alternative art education and self-organisation. For the majority of participants it was a disillusionment or dissatisfaction with higher education or professional life that led them to alternative art education and alternative economies. For others it was a lack of meaningful activity: “…can’t stand the silence and you have to fill it with some noise”.

We asked practical and philosophical questions about education, pedagogy, knowledge, authority and judgement. We agreed that the purpose of an educational context is not to impart knowledge but to “help someone learn how they learn”.

The familiar questions of “quality” and “rigour” came up and we addressed these in terms of judgement and authority. Someone mentioned the distinction that Miles Horton and Paulo Freire make between authority and authoritarianism in the section on Educational Practice of We Make the Road by Walking: Conversations on Education and Social Change (1990). The discussion then turned to the topic of how we treat each other, especially in reflective contexts where we provide each other with feedback or critique. I really liked the idea that instead of highlighting negative attributes “…we water the flowers and the weeds will fall away”, in other words that we can be open and honest as well as being kind. We discussed confidence, which might be a form of self-conscious because “…no one’s really paying attention” and mistakes are part of the learning process, and we concluded that we need to cancel the lack of confidence.

We debated the idea that artists in peer-led programmes are self-taught. Most alternative art schools do not have a structured curriculum and a recognised authority, but the learning process is a collective one that takes place among a group of peers – which is arguably the most important pedagogical dimension of degree courses. We also addressed deskilling and the student-centred learning model in the UK where students are for the most part left to their own devices. In many ways art schools are like think tanks, they attract people with common interests and throw them and let them educate each other, but also compete with each other. If we judge art schools from this perspective, don’t they provide a decent education that mirrors the real world after all? In which case, where does the crux of the critique of HE lie? The immediate answer was “…you’re paying for it”. But if it is a successful model then isn’t it worth paying for? This was countered by a discussion of additional problems such as copyright, cost, debt, employment and rote learning.

Most of these topics would merit a dedicated workshop or even an entire series of events, but it was a good opportunity to get to know each other.

Moving onto the next segment we exchanged ideas and expectations of what a co-operative art school could look like. We started off by articulating our ideas in the form of questions instead of statements and then we sketched those out on a collaborative whiteboard. We were running late so we did not have time for the second part: how a coop art school would work. The notes have been collected in the first column, you can add new columns or rename the existing ones and move the notes from one column to another.

In the final section of the workshop we split into breakout rooms to try out Starhawk’s leadership roles for leaderless groups. Each member of the group assumed one of the leadership roles and debated a hypothetical group crisis. When we returned to the main room everyone was exhausted but the group members shared some thoughts on their subjective experience of assuming a leadership role. These were all very positive, they emphasised a heightened consciousness of everyone’s point of view and their approach to the problem.

This was my first online event and I learned a great deal; I tried out some online tools and misguidedly tried to translate an event that was designed for IRL to an online format.

Online conferencing is a bit like being in Star Trek and Rocky Horror at the same time – but you need to be a Zoom host to get the full effect. To start off, the delegates materialise on your screen like they’ve been beamed up by Scotty, intermittently popping in and out of existence like whack-a-mole Celebrity Squares and glitching more sonorously than Max Headroom. Late-comers have to find a way to contact you from the outer reaches of  the waiting room, because you’re trying to introduce the event and you forget to check the sidebar. Even after everyone has managed to join in, some participants appear to be trapped in an undecided state between existence and nothingness like Schrödinger’s cats, they’re there but you can’t see or hear them and breakout rooms are particularly horrifying. Delegates get sucked into wormholes that lead to other dimensions and if it goes wrong they get spat out or trapped in a time warp. Nobody knows where they are because they’re not in the meeting room or the breakout room, but some undetermined space beyond these like William Hurt in Altered States.

Yes, Zoom… I tried not to use it but I had to switch from Jitsi at the last minute for this workshop. I hate to admit that it is the most reliable platform currently in existence, if not the easiest to use. There are many other more accessible open-source platforms that distribute control more evenly to all the participants and they are much easier to use. I highly recommend these for small informal meetings. But for all their benefits they are not reliable for conferences and workshops; they cannot handle the bandwidth and glitch or cut out regularly.

Other drawbacks can be overcome with creative solutions, for example open-source platforms don’t handle screen sharing effectively and they don’t have breakout rooms, white boards and other tools. But you can use separate screen-sharing applications, whiteboards and other tools. This might compound the amount of admin and preparation that you need to factor in, but it adds variety and different modes of engagement. As for breakout rooms, it would be much more gentle and equitable to set up separate meeting rooms, which delegates can join and leave on their own accord. This might need some additional planning, but it would balance out with a more pleasant and less stressful experience.